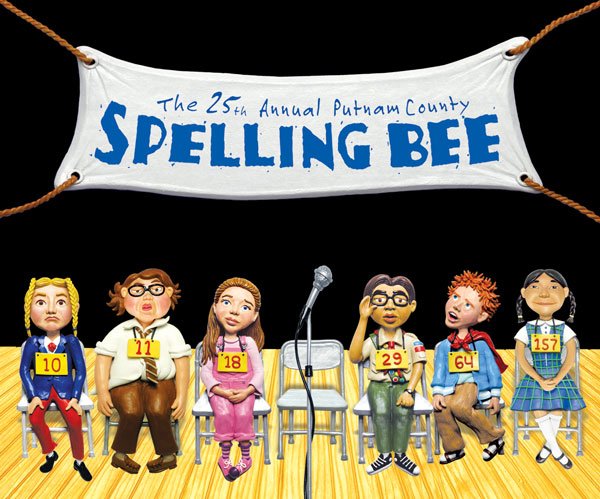 AUDITION DETAILS – A Return to Live Theater at NVC!

To audition, please record an audition video of yourself which includes you performing:

Please upload your video recording of the above to a video sharing platform (YouTube, Vimeo) and send video link to MHamilton@napavalley.edu by 11:59 p.m. on Tuesday August 17th, 2021.

Cast members must be 16 years or older and must enroll in the corresponding Napa Valley College Theater Arts and Music course upon admission.  Learn more: https://www.napavalley.edu/studentaffairs/AR/Pages/HowtoApply.aspx

The production will be directed by experienced faculty in the Napa Valley College Theater and Music Programs.

To familiarize yourself with the production please read the full synopsis below.

In a high school gym, long time hostess, Rona Lisa Peretti, finalizes the preparations for the annual county spelling bee, reminiscing about her own spelling bee victory, many years prior. The current crop of spelling contenders arrives (“The 25th Annual Putnam County Spelling Bee”). The contestants include last year’s champ, Chip (a boy scout), Schwarzy (the youngest and most politically aware contestant), Coneybear (the somewhat wide-eyed offspring of hippie parents), Barfee (an allergy-plagued student), Marcy (an over-achieving Asian-American) and Olive (a tentative newcomer).

Rona also calls on four volunteers from the audience to join the competition (these are real audience members who have been selected through an interview process before the show).

It is revealed that Olive has failed to pay her $25 entrance fee, but Rona assures her that it will be worked out later. Barfee rudely fends off Olive’s attempts to befriend him. Rona introduces Vice Principal Douglas Panch, a last-minute substitute word pronouncer, and Mitch Mahoney, a menacing ex-con who is serving as “Comfort Counselor” as a part of his community service sentence. Panch, Rona and the spellers review the contest’s elimination-style rules (“The Rules”).

The contest begins. As the students are individually called upon, Rona provides color commentary, revealing background info about each of them. A flashback reveals that Coneybear only made in into this contest because his school’s winner and first runner-up were unable to attend due to a Bar Mitzvah. He appears to have no hope of spelling words correctly, but snaps into abrupt trances, during which he performs perfectly.

Olive reflects on a lonely childhood, where her main source of companionship (and spelling excellence) was a dictionary (“My Friend the Dictionary”). The audience volunteers are also called upon to participate. Volunteers who answer incorrectly are eliminated (“Goodbye #1”). Barfee uses a bizarre “magic foot” technique to spell his words.

Rona reveals that Marcy placed high in the ranking for last year’s national spelling bee, impressing all of the contestants. One of the audience volunteers is asked to spell “cow,” prompting outrage from the contestants. The contest swings into high gear (“Pandemonium”) as Panch requests spellings for words that vary enormously in their level of difficulty.

A flashback reveals Schwarzy, drilling for the contest with her two overbearing gay dads. Coneybear, for the second consecutive time, is asked to spell a word related to South American rodents. He confesses that his family does not consider him to be particularly intelligent (“I’m Not That Smart”).

Barfee calls upon his magic foot technique to help him spell the word, “hasenpfeffer” (“Magic Foot”). By this point in the contest, all but one of the audience volunteers have probably been eliminated. Chip is eliminated after getting distracted by seeing Coneybear’s attractive sister, Marigold, in the audience (“Pandemonium – Reprise”). Mitch escorts him from the stage (“Chip Goodbye”).

The final audience volunteer is eliminated when asked to spell a ridiculously difficult word. Mitch consoles the loser (“Prayer of the Comfort Counselor”).

During a snack break, Chip distributes free candy to the audience and laments the fact that his sexual arousal cost him a victory in the spelling bee (“My Unfortunate Erection”). Chip bickers with Barfee and terrorizes him with a packet of peanut M&Ms before being ejected. Olive comforts Barfee.

As the break ends and the bee resumes, Schwarzy reflects on the tremendous pressure placed on her by her dads (“Woe Is Me”). A lightning-fast blaze of spelling ensues, and Coneybear is eliminated when he fails to spell chinchilla correctly (“I’m Not That Smart – Reprise”).

Rona reveals that Marcy speaks six languages. Marcy is exasperated at always being thought of as superior in every way (“I Speak Six Languages”). She is asked to spell the word, “camouflage,” whereupon she rhetorically exclaims “Dear Jesus, can’t you come up with a harder word than that?” Much to her astonishment, Jesus Christ immediately appears and reveals that He doesn’t care who wins this contest. Marcy, relieved, deliberately misspells her word, joyfully eliminating herself.

Only Schwarzy, Olive and Barfee remain. Olive receives a phone call from her dad. Taking advantage of the pause, Schwarzy seizes the microphone and makes a political statement. One of Schwarzy’s dads attempts to sabotage Barfee by pouring a can of Coke onto the stage, hoping the stickiness will immobilize Barfee’s magic foot. It is implied that Olive’s father is unwilling to pay her $25 entrance fee.

Olive is given the word “chimerical,” which means “wildly fanciful and highly unrealistic.” This prompts her to fantasize about her neglectful parents (“The I Love You Song”).

Barfee’s magic foot is foiled by the spilled Coke, but he manages to spell “crepuscule” correctly anyway. Schwarzy is eliminated (“Woe is Me – Reprise”). Only two spellers remain, and Rona is breathless with excitement (“Rona Moment #3”).

After a volley of correctly spelled words, Olive misspells a word (“Second, Part One”) and Barfee hesitates before claiming victory, sensitive to Olive’s feelings. Olive reassures him, and he claims the victory. Panch, taking pity on Olive, invents a $25 prize for “runner up,” which he produces out of his own pocket to cover Olive’s entrance fee. Rona is moved by Panch’s kind gesture. Olive and Barfee warmly congratulate each other.

A series of epilogues reveal the future fates of the characters and explains how their experiences during the spelling bee shaped each of their lives (“Finale”).